Your browser does not support JavaScript!
Home > News > A time to remember Liverpool Pals at former watch factory

This month Lord Derby officially unveiled a new plaque to commemorate the Liverpool Pals, the 17 battalion of the King’s Liverpool regiment, who served during WW1 and were stationed at The Watchfactory in Prescot for eight months.

The event saw the launch of a dedicated plaque, which outlined the story of the Liverpool Pals. The official occasion also featured a wreath laying ceremony ahead of Remembrance Sunday, two minutes silence, a blessing from a priest, a bugler and a bagpiper.

The ceremony took place at The Watchfactory, which is now a modern extra care scheme owned by Knowsley Housing Trust, part of First Ark Group. It included speeches from Lord Derby, whose great-grandfather recruited the Liverpool Pals to help Lord Kitchener’s war effort, in August 1914 and Tony Wainwright, secretary and researcher at the Liverpool Pals Memorial Fund. 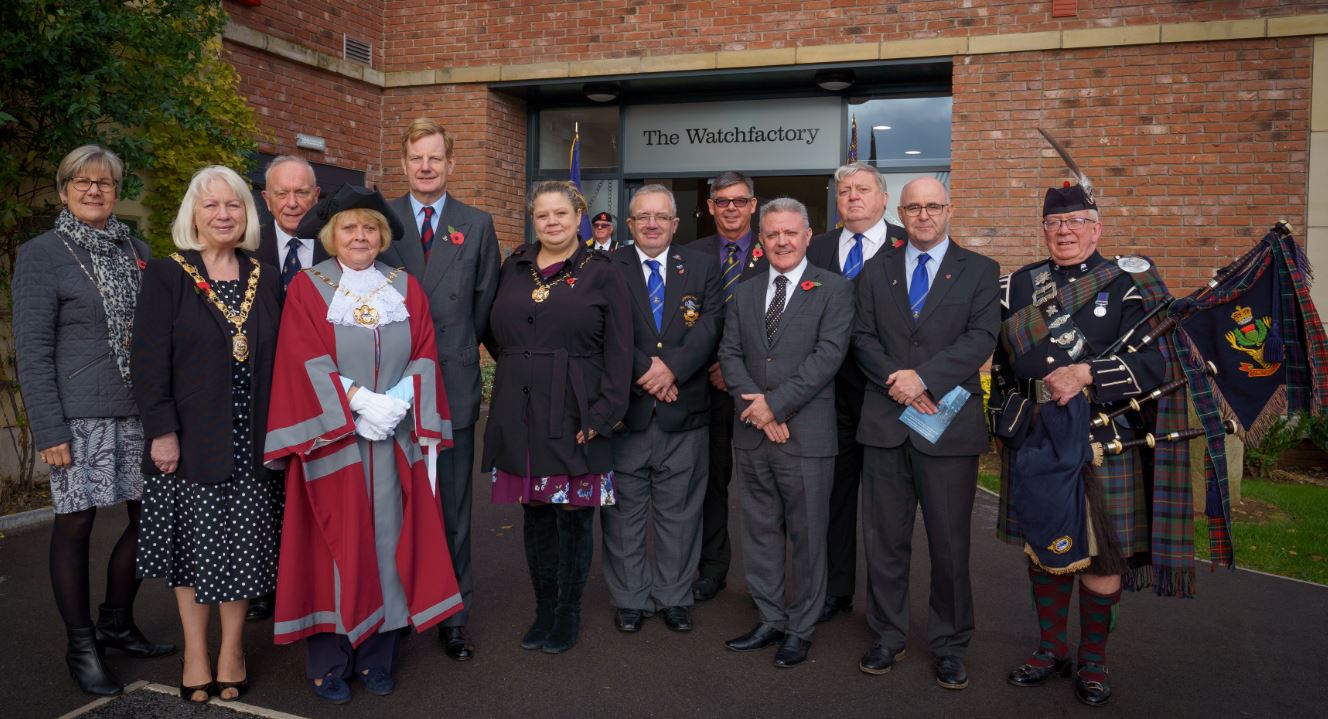 A specially commissioned film was shown at the event that tells the history of how the Grade II listed building, which was built in 1889, was originally the home of the Lancashire Watch Company, at a time when Prescot was the European centre for clocks, watch parts and tools. By 1914 it had become a barracks for the Pals and then fell into despair, before undergoing a £11m transformation in 2015, into a contemporary extra care scheme.

Tony Wainwright, Secretary and Researcher of the Liverpool Pals Memorial Fund, commented: “Our memorial fund is dedicated to ensuring the sacrifice of those who served in the Liverpool Pals battalion, during the First World War, are not forgotten. These men were office workers, shipping clerks, insurance agents, cotton brokers – not your usual soldiers.”

Léann Hearne, Group Chief Executive Officer at Knowsley Housing Trust, part of First Ark Group, stated: “We believe the 130-year story of The Watchfactory is compelling and we need to ensure it is kept alive for future generations. One of the reasons we created a mini museum in the building is to honour its significance as a watchmaking hub and WW1 barracks.

“It has been through so many interesting periods in history and it’s wonderful to see it re-purposed today as state-of-the-art extra care housing, where we offer a holistic approach to wellbeing and lifestyle, with a number of services including an on-site care team and bistro.”

This is the latest in a series of memorials to commemorate the Liverpool Pals and the second to take place in Prescot. The other plaque was erected at Prescot Railway Station to honour the fact that over 6,000 men left that station to fight in Europe on 30 April 1915.

The Watchfactory’s contemporary design retains much of the building’s history and pays homage to its past life, with original features peppered throughout the scheme. The innovative project has proved so popular there is a waiting list of 18 months to join and all apartments and bungalows are now occupied. It now houses 70 residents, mostly over-55 and there are a variety of one and two-bedroom apartments and 16 custom built bungalows, available for affordable rent and shared ownership sale.