Your browser does not support JavaScript!
Home > News > “Beenardos” at Roberts Recycling 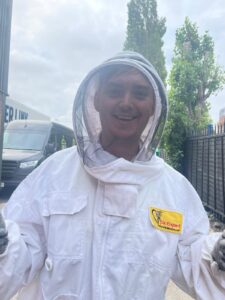 Fred Oldham, an apiarist and former Demolition Manager of the Year for the NFDC, has first-hand experience of the environmental damage caused by demolition and building sites. He has made it his passion to protect bees and was mentioned on Channel 5 last week for his efforts.

Fred approached Roberts Recycling – Paul John and Simon and asked them to provide a home for his rescued bees on their site in Huyton.

We suspect the rescued bees may forage on Stadt Moers.  We are longing to taste the honey which will be peculiar to this area.

The bees would have been destroyed by pesticides or worse if Fred ( www.beehiveremoval.co.uk) had not performed his live beehive removal services.

Each bee would be able to pollinate many trees which in turn would capture tons of Co 2 in their lifetime.

We think Fred saving even one bee is the tiniest act with the greatest outcome of cause and effect….

“Beenardos” is our bee sanctuary in Brickfields.

The spin off (pardon the pun) is the payback in honey.   The rescued bees make our honey and we have pledged to donate the overspill to our local community, already having donated some jars to Innovate, a café in Huyton.

Next year’s crop will be going to The Knowsley food bank and Whitechapel homeless centre.

The company looking for an original biodiversity CSR idea buys the hive and Fred will take out a contract to tend to the “Beenardos” which would home his rescued bees The surplus honey would be returned in a barrel. The business could jar it and personalise it for corporate gifts.