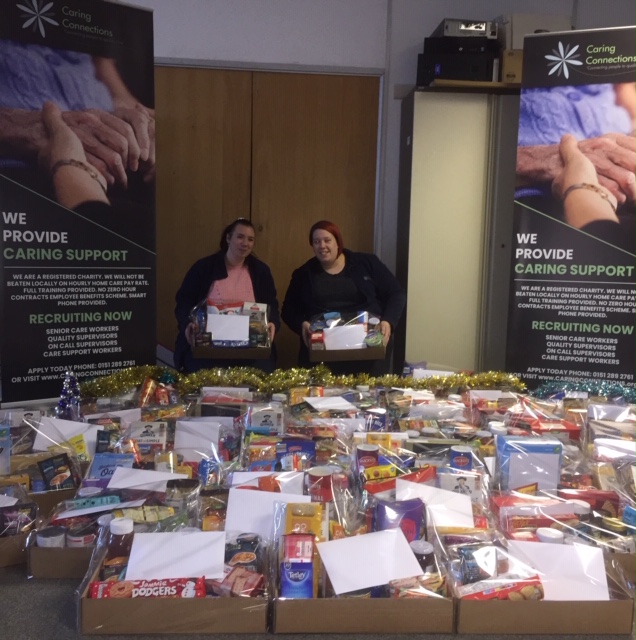 Hampers are filled with mince pies, jams, soups, sweets all items donated by kind individuals and business all with the aim of supporting vulnerable individuals those at Christmas.

John Parry from Utility Depot stated ‘We chose to donate because its heart-breaking thinking of those alone at Christmas and as a business we wanted to give something back, when we heard about the hamper appeal we were inspired to get involved’.

Hampers were delivered across the whole of Merseyside to individuals in Knowsley, Sefton and Liverpool. All individuals being overjoyed with the kind gift.

Rachael Fraser Registered Manager of Caring Connections stated ‘ As a charity we love doing this and just seeing the smile on people’s faces when the carers deliver the hampers makes all the hard work worthwhile. As a social care organisation we often see people who are very isolated and lonely and are always on the lookout of ways we can reduce this’

In 2018 Age UK found that 1.7 million older people in England can go for a month without meeting up with a friend, and that 300,000 over 65s have not even had a conversation with family or friends over the same period. The report found also that in 2018 over 230,000 older people who will be on their own at least one day over the Christmas period, in which 530,000 people aged 65 and over aren’t looking forward to Christmas because for them it’s ‘just another day.’

Paul Growney CEO of Caring Connections said ‘ The issue of socially isolated / lonely older people really needs to be addressed and as a charity we are passionate of tackling this step by step.’