Your browser does not support JavaScript!
Home > News > The Forshaw Group awarded Bronze on board the HMS Prince of Wales

TFG were one of twelve organisations from across the North West to be presented with their Armed Forces Covenant Bronze Award under the Ministry of Defence Employer Recognition Scheme today: on board the HMS Prince of Wales in Liverpool.

The recipients were presented their awards by Cmdre Phil Waterhouse ADC, Naval Commander Northern England and Isle of Man. 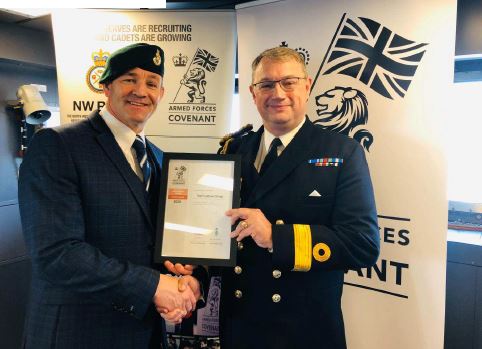 The MOD’s Defence Employer Recognition Scheme (ERS) is a nationally recognised scheme encouraging all employers to support defence services and inspire others to do the same.

Jan Cox, Regional Employer Engagement Director at the North West of England and the Isle of Man Reserve Forces’ and Cadets’ Association (NW RFCA), said: “On behalf of the Ministry of Defence we are honoured to be able to recognise the level of support and commitment given to the Armed Forces by organisations in the region.

Each recipient has demonstrated not only that they value the ethos of the Armed Forces but also that they are prepared to help Reservists, former servicemen and women and Cadet Force Adult Volunteers in the workplace. The opportunity to present their awards today on board the awe-inspiring HMS Prince of Wales has been remarkable.”

Following the award presentations, the recipients received a bespoke tour of the hugely impressive Royal Naval carrier. The HMS Prince of Wales arrived in the city on the 28 February for a week-long visit packed with celebrations and engagement with the local community.