Your browser does not support JavaScript!
Home > News > Help beat lung cancer with a stroll along the Mersey 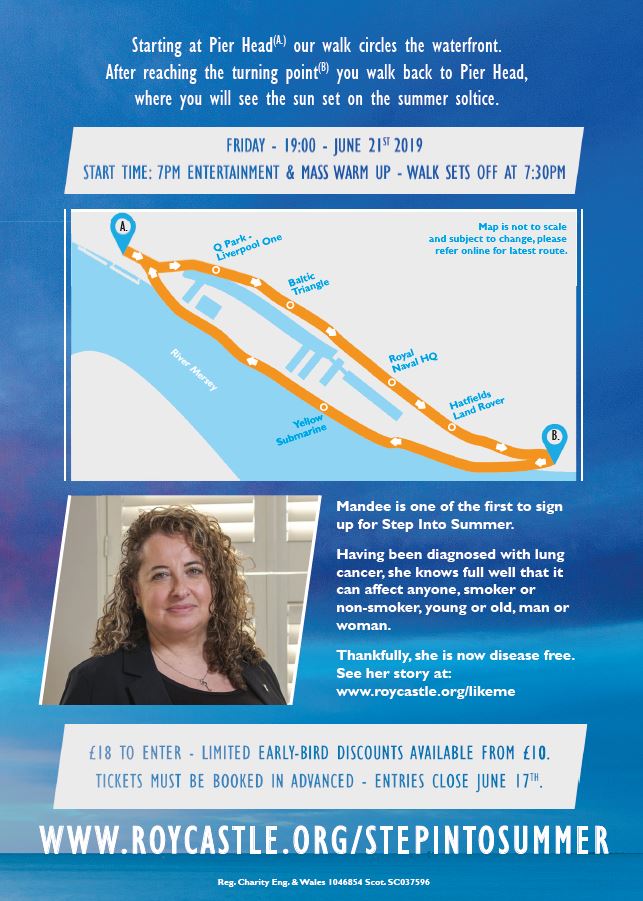 The longest day of the year is fast approaching – the Summer Solstice on Friday June 21st.
And you could celebrate in style as the sun finally sets over the Mersey on that very special day – and help fund vital research projects too – at a brand-new event being launched by Roy Castle Lung Cancer Foundation.

‘Step Into Summer’ is a charity walk which circles the waterfront, starting and ending at the Pier Head, and offers stunning views of this designated World Heritage site.

It all starts at 6:30pm, at the ‘Charity Village’ at the Pier Head.

There will be entertainment from a samba band and dance troupe to create a real buzz. Walkers are encouraged to add a bit of glitz to their outfits – face-painters will be on hand – and, to help everyone get off on the right foot, there’ll be a mass warm-up led by Signature Fitness team from Signature Living.

The six-mile route runs parallel to the riverbank, passing along the Strand by the Albert Dock, on to Riverside Drive, past Liverpool Marina and Brunswick Business Park, and through to the turning point near the Chung Ku restaurant, from where walkers will head back to the Pier Head.

The event, sponsored by oatcake food firm Nairn’s, is open to anyone over 16 and tickets must be booked in advance. These cost £18 per person, although limited number of early-bird tickets are currently available at £14. All entries close on June 17th.

As well as entry to the walk, you’ll receive an official event t-shirt, a customisable card for your shirt, entry to the Charity Village at the Pier Head with food and entertainment and a special ‘Step Into Summer’ medal.

If the weather obliges, there should be a stunning view of the sun finally setting on the Mersey marking the end of the longest day, expected to be around 9.30pm.

It will also be a culmination of the charity’s #LikeMe campaign, which is raising awareness of how lung cancer can – and does – affect younger women.

The charity’s chief executive, Paula Chadwick, said, “Anyone can get lung cancer, even seemingly healthy young women. In fact, it is the second biggest cancer killer of women under the age of 50. Too few people realise that.”

The #LikeMe campaign tells the story of ten women, aged between 29 and 50, all living with lung cancer; five of them face the prospect of leaving behind their partners and young children. Some of these brave women will be walking the ‘Step Into Summer’ route to show their support for the charity and its work.

One of these women is Mandee Lucas, who was among the very first to sign up for ‘Step Into Summer’. She said, “I was diagnosed with lung cancer four years ago. I just didn’t think it would happen to me; even my GP was amazed – but it did. It can affect anyone, at any age – whether you’ve ever smoked or not. “That’s why I’m proud to be part of the #LikeMe campaign, and to take part in ‘Step Into Summer’ too. It’s a lovely way to celebrate the Longest Day and show support for the wonderful work of Roy Castle Lung Cancer Foundation.”