Knowsley Lift Services are delighted to announce that they have secured the contract for the supply and installation of the lifts in The Shakespeare North Playhouse, by Kier Construction.

Co-director and co-founder of Knowsley Lifts, Stephen Fitzgerald, said: “We are very proud to have secured the Shakespeare lift contract in Knowsley, where our business first started out. Over the past two decades we have built a growing reputation for being one of the best independents in the UK, winning a number of prestigious contracts. Our customers keep coming back to us, which is testament to our quality work and our amazing team.” 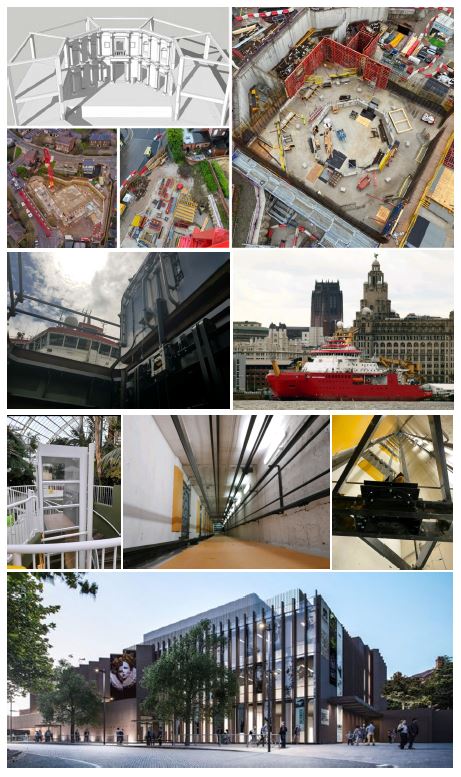 Once complete, The Playhouse will provide a flexible theatre with capacity for up to 472 seats, based on the iconic 17th century ‘cockpit-in-court’ design. It will also boast an inclusive education programme, digital gallery, visitor experience and additional performance spaces including an outdoor performance garden.

Alongside high-profile Shakespearean drama, the Playhouse will host a variety of comedy, music and theatre from a wide variety of performers. The fascinating connections between Prescot, Shakespeare and Elizabethan theatre establish the historic foundations for The Shakespeare North Playhouse, which will be one of the North of England’s most high profile cultural and educational assets when it opens in 2022.

As part of the project, Kier are working with the local supply chain wherever possible to strengthen the local economy and support the Knowsley Better Together ethos. Even before the Playhouse is completed it is already having a significant impact on the local area with new high street businesses moving to Prescot, 1500 new homes being built and significant investment being made by Knowsley Council in public realm and connectivity improvements.

Alongside the tangible benefits The Playhouse is expected to attract more than 140,000 visitors a year, once established, bringing a boost of more than £5.3m to the local economy (GVA) and a range of employment opportunities directly and indirectly linked to the project.

This is not the first Theatre project for Knowsley Lift Services. Previously they were engaged by Gilbert Ash, to provide elevators on the Everyman Theatre rebuild. The completed Everyman won the prestigious 2014 RIBA Stirling Prize, beating off such famous landmarks as the Shard in London and the stunning final finish of the provided lifts gained plaudits for the sensory experience provided for the lift passengers.

Carey Oakes, Operations Director of Knowsley Lifts, said: “Much of our work is very niche and this is where we outperform our competitors. We have great flexibility. We can put a lift in any shaft and a lot of the work we do is not standard.”

Now in their 24th year, Knowsley Lift Services are one of the largest and most respected independent lift companies, specialising in maintenance, repair, installation, and modernisation of lifts and escalators. The company thrives on a customer centred and flexible approach whilst still offering unrivalled value for money and technical expertise.

In 2020, Knowsley Lifts were selected as the successful installers for two of Liverpool’s Grade 1 and Grade 2 listed buildings – St Georges Hall and Sefton Park Palm House as well as two major projects in the Royal Liver Buildings and the RSS Sir David Attenborough.

Co-director and co-founder of Knowsley Lifts, Tommy Murphy, said: “With our brilliant team we are very confident about our future prospects and we will be growing the team this year. In normal times there are more journeys made in lifts in the UK every year than in cars. We already have guaranteed work for the next 18 months and more is coming in on a weekly basis. We are definitely going up!”

Cllr Tony Brennan, Knowsley Council’s Cabinet Member for Regeneration and Economic Development said: “It is a fundamental part of the contract with Kier that wherever possible, local companies have the opportunity to tender for work as part of the construction of The Shakespeare North Playhouse. It’s really important to the council that we support our local businesses across the Liverpool City Region as much as we can.

“The Shakespeare North Playhouse is an extraordinary project and I am delighted that Knowsley Lift Services have been successful in securing this work. It’s also a great opportunity for their apprentices to be involved in such a unique development.”