Knowsley’s Sterling Services that operates all over the UK is hoping to increase activity in the borough and grow across Liverpool City Region with a signifiant senior appointment to its growing team.

The construction business based on Knowsley Business Park has brought in the former Executive Director of Place and more recently Communities and Neighbourhoods at Knowsley Council.

John Flaherty, who started his career as a trainee at Sannop Electrical Engineers on the industrial estate, before working for Knowsley Council for 38 years in roles spanning Education, Operations, inward investment, regeneration, development and strategic projects has become a Non-Executive Director.

Known via his past Twitter handle as ‘Captain Knowsley’, John is credited with transforming and accelerating Knowsley’s economic growth, delivering the Local Plan and associated Housing Development in the borough as well as bringing forward major projects including Shakespeare North Playhouse.

He will focus on growth of Sterling’s activity across the public and social housing sectors. 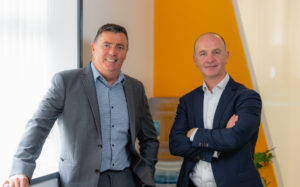 From beginnings as a groundworks company established in 1984, Sterling Services (Northern) Ltd is now a multi-million pound business operating across three divisions; Electrical, Grounds and Building Maintenance and Construction projects.

Managing Director Paul Blennerhassett, who left a career in the music industry to take the reins of his parents’ business as MD in 2006, said: “Our success lies with our team. We’ve so many talented people across our divisions including apprentices so I’m delighted to welcome John into the senior team.

“He brings different skills, knowledge and contacts which will be invaluable to growing the business within the next three years and beyond.”

He added: “We’re successful all over the UK with contracts with major supermarket chains, petrochemical companies and others but we never really established ourselves locally.

“I grew up in Page Moss and the majority of our team live in Knowsley so it would be fantastic to build long-term relationships with clients closer to home so I’m hoping John can support this.

“There are so many fantastic companies on our business park, across the borough and the wider city region who will all need electrical work and testing and grounds and building maintenance.

“We’re also the only approved electric vehicles charging point installation partner for Rolec RV who can carry out both the underground and above work for electric charging points.

“We put in a number at Liverpool FC’s new training ground and there’s growing demand as companies start to think about the future and the need for on-site charging for company vehicles, staff and visitors.”