Your browser does not support JavaScript!
Home > News > Village Hotel Club launches ‘Hope for a Coat’ to help the homeless

As the temperature drops, Village Hotel Club is launching its ‘Hope for a Coat’ coat drive, asking staff, guests, local communities and businesses throughout the UK to kindly donate any unwanted or unneeded winter coats to those less fortunate.

Over the next couple of months the group is turning its hotels into distribution centres, and anyone that wishes to donate need simply drop off their unwanted items at their local Village Hotel Club. 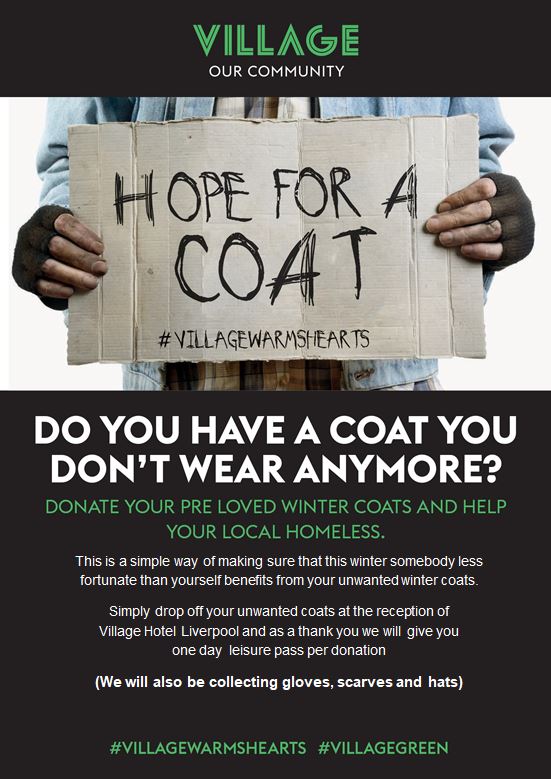 The group started collecting coats on 10th October, National Homeless Day, and has set a target of collecting 1000 coats by 31st November. Every coat collected will then be distributed to the homeless via homeless charities across England, Scotland and Wales.

Earlier this month, as part of the campaign, members from Village Hotel Club’s National Sales Team joined local homeless charity Doorways Derby to provide hot and cold food, drinks, clothing, bedding and social interaction for the homeless, rough sleepers and vulnerable people in Derby. In addition, on the 26th October, eight members of staff from across Village Hotel Club will also be taking part in Doorways Derby’s annual sponsored Sleep Out, and whilst there will assist in serving food and collecting donations.

Paul Roberts, Chief Executive Officer at Village Hotel Club, said: “At Village, we’re more than a hotel; we’re part of the local community. And through our Village Green initiative we want to make sure we are giving back to that community. Some reports are claiming we could be facing the coldest winter in decades, and something as simple as a coat can make so much difference to those in need, so we’re urging our gym members, hotel guests, staff, local communities and businesses to give what they can, and are hugely grateful for anything you can spare.”